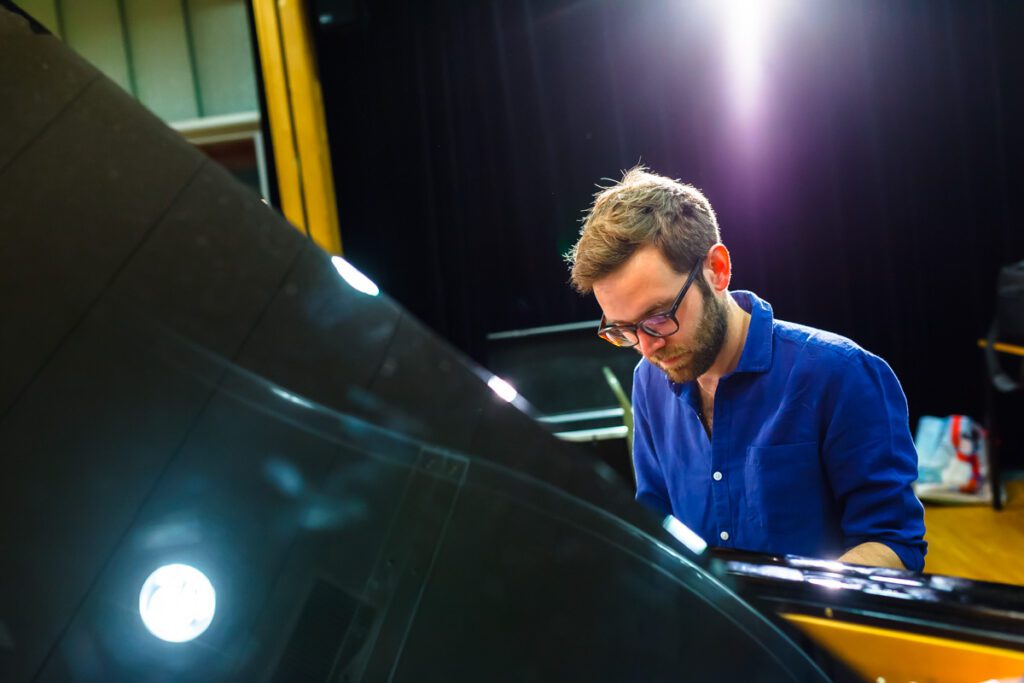 Trained at the Conservatoire de Neuchâtel (Switzerland) and at the Royal College of Music in London, Antoine Françoise is a French-Swiss pianist and composer. He studied piano with Paul coker, Monty Solomon, Andrew Ball, Ashley Wass, and saxophone with Laurent Estoppey. He performs internationally in the fields of classical, contemporary and experimental music.
Fascinated by the music of our time and working with living composers, he worked for a long time in London with the London Contemporary Orchestra, where he collaborated notably with Jonny Greenwood, guitarist of Radiohead, on stage and film music. He has also performed with the London Philharmonic Orchestra and the London Sinfonietta on several occasions.

In Switzerland, where he currently resides, he is principal pianist of ensemble Contrechamps in Geneva and the piano duo Antoine, Françoise, Gilles and Grimaitre. He is also artistic director and programmer of the Nouvel Ensemble Contemporain (La Chaux-de-Fonds, Switzerland) since 2016 as well as artistic collaborator at the festival Les Amplitudes.

He is a piano teacher at the HKB (High school of the Arts of Bern).
On the international scene, he performs with Nikel, a quartet of percussion, saxophone, electric guitar and piano appearing in all the major contemporary music festivals (Berlin, Paris, Vienna, Buenos Aires, Tel Aviv, Hamburg etc.).

As a pianist, Antoine has worked closely with composers such as Rebecca Saunders, Helmutt Lachenmann, Eric Gaudibert, Mark Barden, Steve Reich, Alexander Schubert, Hanspeter Kyburz, Chaya Czernowin, George Benjamin, Clara Ianotta and many others. He has several hundred creations in his repertoire.
His compositions have been performed in France, England, Switzerland, the United States, Brazil and Korea. He usually writes for solo or small chamber music ensembles and he regularly collaborates with the children’s theatre company Globes-Trottoirs as arranger, musical coach or composer.
In 2019, he co-wrote the music of Diverti Menti, the latest show of the choreographer Maud Blandel in which he also plays the piano part. From this meeting several projects mixing choreography and live music are currently in preparation.
For 2022 and 2023, he has been invited to compose for two theatre and dance projects:
Elisabeth Vogler, by Floriane Comméléran (Alphageste company)
My Epifunny, by Marco Berrettini (company *Melk)