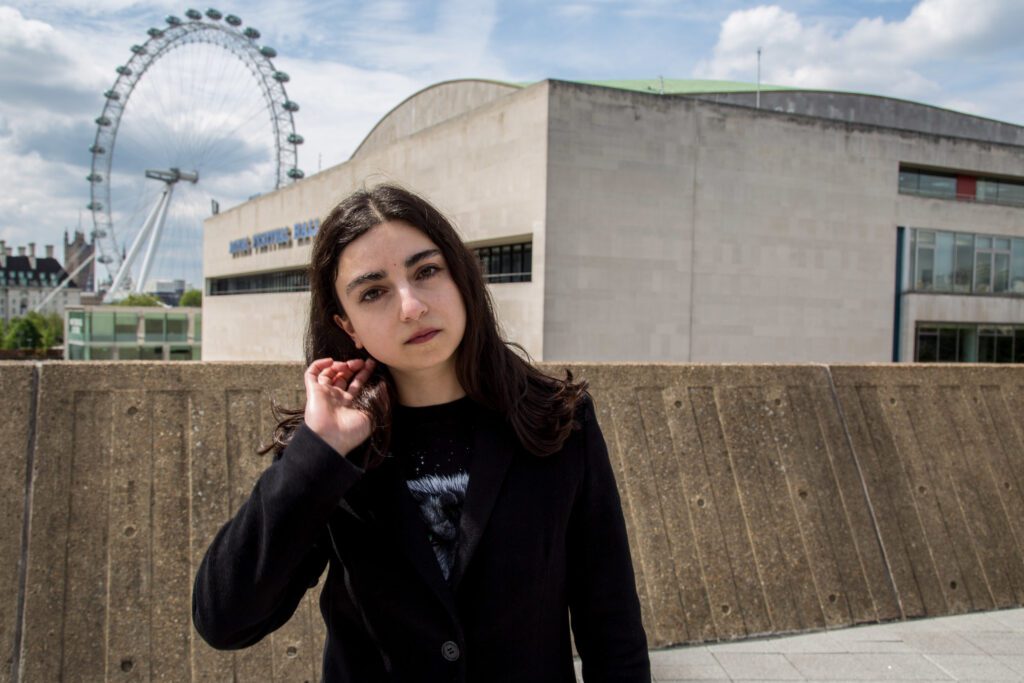 Shiva Feshareki (1987) is a British-Iranian composer, artist and turntablist, described as the most cutting-edge expression of turntablism. Over the last decade, she has been a pioneer at the leading edge of both contemporary classical and electronic & dance music scenes.

She holds a Doctorate of Music in composition from the Royal College of Music (2017), and is winner of the BBC Young Composer’s Award (2004), The Royal Philharmonic Society Composition Prize (2009) and the Ivor Novello Award for Innovation (2017).

She has performed extensively across the world in concert halls, art galleries, festivals and raves, with notable appearances at BBC Proms, The Tank at Tate Modern, Southbank, Barcelona’s Sonar Festival, the Moscow Museum of Modern Art (VAC), Casa Del Lago (Mexico), Hyperreality Festival of Club Culture (Vienna), Mutek in Montreal, Artheater/Frau Musica Nova (Cologne), Maerzmusik (Kraftwerk, Berlin) and Appia Stage (Hellerau). She most recently featured at the Design Museum Electronic Music Exhibition, which was held in London until the end of May 2021.

Two significant projects Shiva undertook in recent years include premiering Daphne Oram’s visionary Still Point with the London Contemporary Orchestra at the 2018 BBC Proms, which had been unheard since its inception in 1948, and also aiding in the organisation of premieres of Eliane Radigue’s works, most notably within a cave. Radigue and Oram are also two key influences on Shiva’s music, alongside Pauline Oliveros, James Tenney, Iannis Xenakis, Jungle, Drum and Bass, IDM, Baroque and Classical music, minimalism, analogue pop music, psychology, physics, geometry, architecture, philosophy and hermeneutics!

Describing Shiva’s music is far from straightforward, when the breadth of expression, and range of compositions encompasses everything from orchestral, solo, choral, chamber and electronic works. At the core of her work, Shiva creates experiences that reveal the fluid and infinite interplay between sound and the physics of space; the interconnection between the essential nature of sound and our living experiences. Undeniable influences include avant-garde electronic music of the late 20th Century, and electronic dance music, which she cross-pollinates in a formidable and uncompromising manner. This is best exemplified in her prowess as a turntablist, of which her talent mirrors that of her extraordinary compositional abilities, and of which she has made radical contributions to the art of turntabling – taking experimentation with the turntables to its limit, whilst still producing music that is universally relatable across a diversity of audiences.

Shiva’s underlying philosophy is equally as profound as the music she produces. Exceedingly aware of the cultural crises, and the self-actualisation she has had to manifest to confront conventions as an ethnic minority female in a largely white and patriarchal music culture, her music is a direct response to the issues many of us currently face as artists and as humans. It is a music that provides solutions, by opening up possibilities and broadening perspective.

Perhaps this is best reflected in her recent work OPUS INFINITY (2019) for turntables and orchestra, where the performers, who perform from within the audience, are positioned across the acoustic space in relation to the proportions of Fibonacci spirals, which also govern the musical material. The possibilities within this physical, musical and spiritual spiral are infinite, and each performance of the work becomes an entirely new experience, influenced by the performance space, the performers, and the musical responses generated. To accomplish something this daring, Shiva uses vinyl turntables with vintage analogue tape echo, CDJs and state-of-the-art 360o ambisonic technology, that not only make it possible for her to open up an extensive and otherworldly soundscape, but also to control performer reactions in real time, using their positions across the music space to aid in this qualitative calculation.

Shiva’s latest output includes a focus on works for immersive electronics and choir which will include ‘Aetherworld’ for the BBC Singers at the BBC Proms 2021, ‘Otherworld’ for National Youth Choir Great Britain at the Three Choirs Festival July 2021, as well as a major work for the Netherlands Chamber Choir which is being toured alongside composer David Lang in October 2021. Her new electronic track ‘Nebula’ (based on Opus Infinity) will be released on Matiere Memoire in June, and her immersive work ‘Seismic Wave Orchestra’ will be premiered in Ghent in December by Shiva and the electric guitar quartet Zwerm. Shiva will also present a special retrospective concert with the Ergon Ensemble at the Nostos Festival, Athens on 28th August, which will encompass the breadth of her work from recent works combining live electronics with ensemble, to her solo turntable experiments and early career-defining pieces.